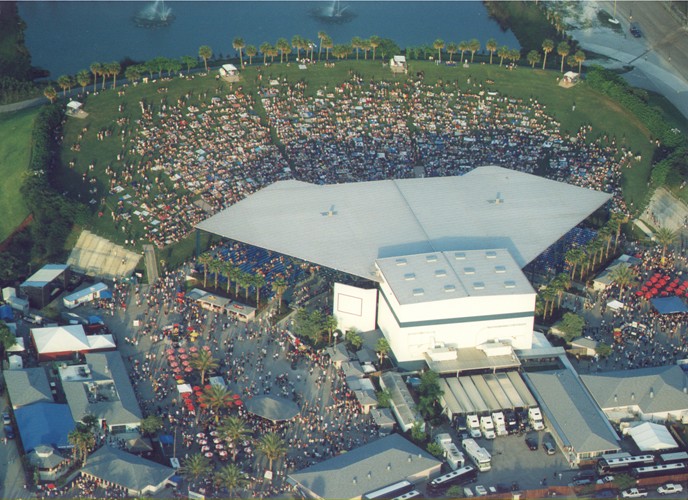 Plenty of places to get your groove on in South Florida, with at least 15 music theaters located within an hour’s drive of Fort Lauderdale.

You can go elegant, with visits to such high-brow venues as the Henry J. Kravis Center or the Adrienne Arsht Center. You can try mid-level by visiting an amphitheater or an arena for a show. Or you can go grungy, hitting a hot and steamy music-oriented nightclub like Respectable Street or Culture Room.

If you’re looking for a night out listening to music in South Florida, check out:

Mizner Park Amphitheater. Located in downtown Boca Raton, this 3,00-seat amphitheater is part of a mixed-use lifestyle center that includes shops, restaurants, apartments & offices. The venue has another 1,200 standing room spots, plus ample listening space on the lawn out front for folks who don’t want to pay for a ticket.

Funky Biscuit. Located in Boca Raton, this small music room has a capacity of just a few hundred people. Tables and seats at the bar must be reserved. Music ranges from New Orleans funk to delta blues to jazz fusion to rock ‘n roll. Since the venue is found in an upscale shopping plaza, the free parking can be tight on weekends.

Respectable Street. Located in downtown West Palm Beach since 1987, this small club is one of the longest-running music rooms in Florida. The venue is primarily a dance club, playing indie, classic new wave and progressive dance music. With live music on the weekends, it’s a showcase for underground music and bands.

BB&T Center. Located in Sunrise, it’s the home of the NHL’s Florida Panthers. The Sunrise arena holds more than 20,000 people for concerts. The stadium was built in 1997. Parking is tight; most of the 7,000 spaces are reserved for suite owners and box-ticket holders. Be prepared to pay to park at the Sawgrass Mills Mall.

Seminole Hard Rock Live. Located in Hollywood, this 5,500-seat music theater specializes in classic rock bands. The Hard Rock Live theater, part of the state’s largest gambling venue, also can be configured to hold ¾ of capacity or ½ of capacity. The complex opened in 2005. Plenty of free onsite parking.

The Culture Room. Located in Fort Lauderdale, this too-tight venue specializes in alternative music and up-n-coming bands. The place holds only a few hundred, and the parking lot is tiny. But inside the sound, lighting and sightlines are great. Three bars, one upstairs and one outside. Be prepared to get hot and sweaty.

Adrienne Arsht Center. Located in downtown Miami, this performing arts center hosts the city’s opera, ballet and symphonic groups. The center was built in 2006, and renamed in 2008 after a $30 million donation. Two of the three main theaters hold about 2,300 people each, while the third accommodates 200 spectators.

American Airlines Arena. Located in downtown Miami, it’s the home of the NBA’s Miami Heat. The arena’s Waterfront Theater, the largest in the state, can be configured to seat between 3,000 and 5,800 people. Opened in 1999, the arena offers limited on-site parking and Metrorail access.

The Fillmore Miami Beach. Located in Miami Beach, this iconic venue was given new life when purchased by Live Nation in 2007. The theater where The Jackie Gleason show was produced and filmed live in the mid-1960’s now hosts rock ‘n roll bands on most weekends. Valet parking available for most shows, $15 per car.

Grand Central. Located in downtown Miami, this warehouse-like space offers plenty of room for drinking and dancing. The venue features two bars, an outdoor seating area and great lighting. Features dance bands, electronic bands, DJs, anything the young kids are into these days.

The Stage. Located in the Miami design district, this dance club features high ceilings, comfortable seating and art-covered walls. The sound system is one of the best in the city, and there’s an outdoor bar area. Plenty of tables and chairs for people who want to make a night of it.